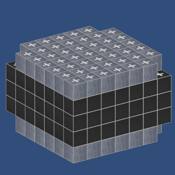 How to Play
The first page of the game is the element period table, from there you can choose to create a new option. Follow the steps below to play the game!

Step 2: You can choose the target element

Step 3:You can choose the layer of the atomic nucleus, on each layer, click on proton or neutron cube block to select

Step 4: Click on a square to drop it, after you finish that layer, then you can start another layer, layer by layer, when it matches the target atomic nucleus key value, number of protons, number of neutrons, and spin value, the game finished!

Atomic nucleus sample
H1
The simplest atomic nucleus is hydrogen one H1, which has only one proton, structured as 1x1x1, just one layer; that layer only has one proton.