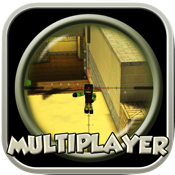 Block Shooter is a fast paced Multiplayer shooting game of ultimate first person shooting blasting action will have you running! Shoot and move

With many weapons to choose from, you will jump from map to map, from island to island via the portal teleporting system to engage players from around the world or locally! Total mayhem will ensue in death match made.

Several maps to explore as you dodge the bullets of your enemies! From Trafalgar Square to the jungles of Cambodia you will fight! Not to mention the urban combat of Tunis City where you will discover secret passageways and hiding holes that you will need to evade the snipers or become one yourself by lying in wait on the city rooftops! Experience 4 flying islands that are covered in Lava, dust, snow, and grass! SpaceLabs and metal cubes! No matter what, don’t forget the portals, they are your ticket to more combat than you can throw grenades at! Get your pixel guns blazing!